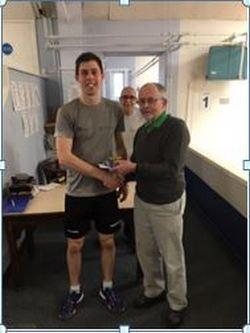 Over 50 players took part in the 2019 edition of the Coventry Open over the weekend of the 23rd and 24th of March.

With cash prizes for the ‘A’ event, there was a strong draw with last years champion Miles Jenkins topping the draw. Current county champion Chris Hall, Nottingham based pro Owain Taylor and Leamington’s Jason Pike making up the top four seeds.

There was just one upset on route to the semi-finals with Edgbaston Priory’s rising star Lewis Anderson getting the better of a close four game encounter with Pike. Despite going close in a couple of games against Jenkins, Anderson couldn’t quite do enough as the top seed progressed to the final in straight games. The other semi final between Hall and Taylor was always going to be close with Hall taking a hard fought 2-0 lead before Taylor fired back to close the gap. Hall regrouping to take a 3-1 win.

In a high quality final the first two games were split, before Jenkins pulled away to take a 2-1 advantage. A tight fourth game went to the wire, Jenkins managing to convert and take the title.

In the ‘B’ category Nottingham’s Andy Hood and Rugby’s Barrie McLelland put on strong displays to set up a final showdown. It was Hood who came out on top in a good quality final. Thanks to Andy also for marking over the weekend, including the A final.

Natalie Townsend and Stefan Peters made the final of the ‘C’ draw, Townsend coming through in three games that got closer through the match. She will have been happy to win in straight games.

Jauvan Dhins was victorius in grade ‘D’, beating Sanath Nair into second place in a round robin event.

Another well run event by Mo Sarwar which was well recognised by all of the players. Thanks also to the event sponsors; Subway, European Thermodynamics Limited and Foremost Spares.