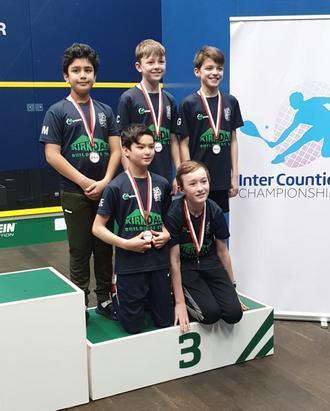 Five of our junior teams had made it through to the finals and travelled to Notingham last weekend to battle it out with the top junior teams in the Country.

The boys under 11 team played Middlesex in their quarter final match up, losing out in a nailbiting 2-1 defeat. In the playoff macthes they went down to a strong Kent team before beating Lincolnshire to finish a creditable 7th place.

Our Under 11 girls were in the plate finals and took out Lincolnshire 2-1 and Suffolk 3-0 to claim the silverware.

A strong performance against Suffolk saw the boys win 4-1 to make it through to the semi-finals where they would meet Yorkshire. Despite excellent wins number 1 and 3 strings they lost out 3-2 to a very strong side. A dominant victory over Sussex leaving them with an excellent 3rd place finish.

With a very impressive line up for a B team the boys were competing for the plate title. They eased through the quarter final match up with Hertfordshire and then came through a much tougher encounter with Northumbria to amke the final. Another 4-1 win against Lincolnshire made the boys the plate trophy winners.

With a number of the players still eligible for the under 13’s, this young side went in with nothing to lose. They snuck past South East Wales 3-2 in a very tight match to move into the semi-final. Here they met a very good Hampshire side who were just too good. The girls regrouped to win comprehensively against Sussex to finish 3rd overall.