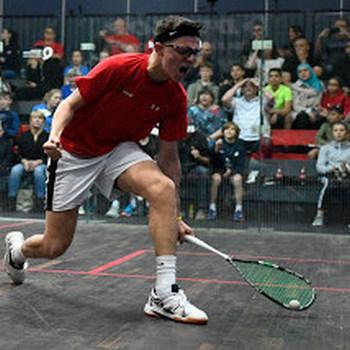 Lewis Anderson admits he had to muster every ounce of concentration as he powered through an enthralling five-game thriller to secure his maiden title at the British Junior Championships.

Anderson burst out of the blocks and dictated the first two games at a furious pace, racing into a 2-0 lead as he opened up his Scottish opponent.

But Prott proved why he was the top seed in this tournament and matched Anderson in the third, winning 11-7.

In a physical game interspersed with unforced errors from both players – a testament to the high intensity showcased by both – Solihull-born Anderson was in the driving seat after a 5-1 lead in the fourth, but a determined Prott battled back, producing a brilliant volley en route to fighting back to levelling at two games apiece.

And in a nail-biting last game, it was Anderson who kept his cool at 9-9 to power to a two-point victory and become the first Warwickshire player since Gary Robinson in the Boys Under 19 win in 1985 to claim BJC silverware.

It was a mammoth result for the left-hander, who lost to Prott in the Welsh Junior Open last year and looked a different player to his runner’s up performance at this year’s English Junior U17 Championship in March. Anderson said:

“I had to regroup for the last game and i kept composed when it mattered. I’m just so happy”

“It was neck in the fourth and then I hit a frame which I thought was good but the ref thought otherwise, so that put him game ball up and I lost my head a bit which made me lose it.

“After I lost the English Closed final in March, my coach went away and decided we had to keep mentally tough in those situations.

“I’ve worked on it over the past six months and for this one, I was ready.”