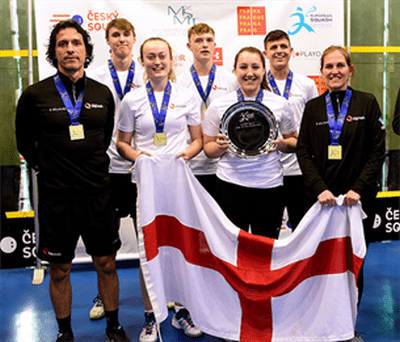 Edgbaston Priory youngster Lewis Anderson represented the England U19 team that won the European title in Prague last month. England topped their group with wins against Denmark, Poland, Wales and Norway before taking down Spain 2-1 in the quarter-finals. Another 2-1 victory against the Czech Republic booked a final spot against Switzerland which they won to take top prize. Anderson winning all of the matches he played.

In the indivdual event he booked a last 16 place with wins over Scotland’s Andrew Glen and Czech Rrepublic’s Karim Faragg. He lost out to Liechtensteins’s David Maier 3-1. Two more positive results against Swiss pair Nils Roesch and Campbell Wells set up a play off for 9th and 10th position against Alisdair Prott of Scotland. Prodt taking the match but still leaving Anderson with a strong 10th place showing.