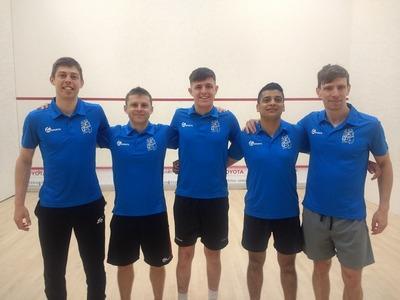 Our Racketball team travelled to Nottingham over the weekend of the 8th ad 9th of June to take part on the national inter county championships. The squad comprised of Chris Hall, Miles Jenkins, Josh Owen, Lewis Anderosn, Howard Lancashire and Haroon Rashid.

In the group stage they overcame Dorset, Buckinghamshire and Lincolnshire, all without dropping a rubber. This set up a tough semi final with defending champions Devon, which was certainly what the final should have been.

Wins for Owen and Jenkins weren’t quite enough as Hall, Rashid and Anderson lost out. The latter coming very close in a 3-2 defeat. Well played team and let’s go one step further next year!

For full write up and results please click here