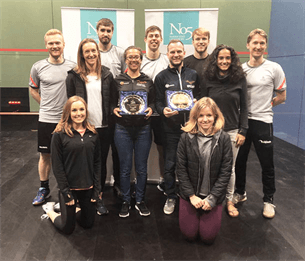 Priory Do The Double At The National Club Championships

Edgbaston Priory secured an impressive double at the No 5 Barristers National Club Championships Finals which were hosted at Priory. Over the season teams had battled it our over a number of categories from juniors through to the over 55’s.

In the mens event Priory beat Colets in the last four to set up a final against a strong Roehampton side. On paper this looked an even match up but Priory ran up an unassailable 3-0 lead with wins for Joel Makin, Miles Jenkins and Chris Ryder.

The ladies team beat Roehampton in their last 4 match and had an equally tough final against Pontefract. Wins for Millie Tomlinson and Julianne Ccourtice, together with a close loss for Alicia Mead, being enough to take the title.

David Lloyd Solihull took 3rd place in the mixed O45’s with a 2-1 scoreline over Colets. In the mixed O55’s Priory also reached the final but couldn’t keep up with their Colets counterparts. West Warwicks finished 4th in the non-county player event.