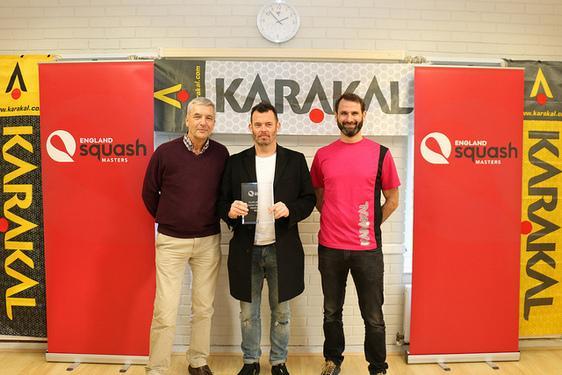 Redfern and Staunton Win at South of England Masters Event

Geoff Redfern continued his hot streak in tournaments this year to take another title at the South of England masters event at West Worthing. Nick Staunton also put in a fine performance to upset the seedings in winning the O45 event. Andy Murray came agonisingly close to making it a hat trick of win for Warwickshire players, holding match balls in a thrilling O50 final before succumbing in 5.

Having already won events at the North (Pontefract) and Midlands (Edgbaston Priory) events, along with the Welsh Open, Redfern was favourite to take another title. He didn’t have it all his own way, being extended to four games in three of his matches, including the semi-final against Paul Reaer (Hampshire) and final against John Goodrich (Suffolk).

Stauton was looking for his first regional event win of the season and went into the draw as second seed. He had to fight back from 2-1 down in his first match before finding form to win his semi-final in straight games. Staunton managed to overcome top seed Jonathan Gliddon (Devon) in a four game final.

Having reached the final at the West of England event, Murray was also looking for his first win of the season. He justified his place as second seed, winning through his quarter and semi-final matches, both 3-1. A suprise opponent awaited in the final in the form of Phil Yerby (Buckinghamshire), who had beaten the top seed in the semi’s. In a nail-biting match both players had chances to claim the win, Yerby eventually closing it out 13-11 in the fifth.

This website uses cookies to improve your experience while you navigate through the website. Out of these, the cookies that are categorized as necessary are stored on your browser as they are essential for the working of basic functionalities of the website. We also use third-party cookies that help us analyze and understand how you use this website. These cookies will be stored in your browser only with your consent. You also have the option to opt-out of these cookies. But opting out of some of these cookies may affect your browsing experience.
Necessary Always Enabled

Any cookies that may not be particularly necessary for the website to function and is used specifically to collect user personal data via analytics, ads, other embedded contents are termed as non-necessary cookies. It is mandatory to procure user consent prior to running these cookies on your website.