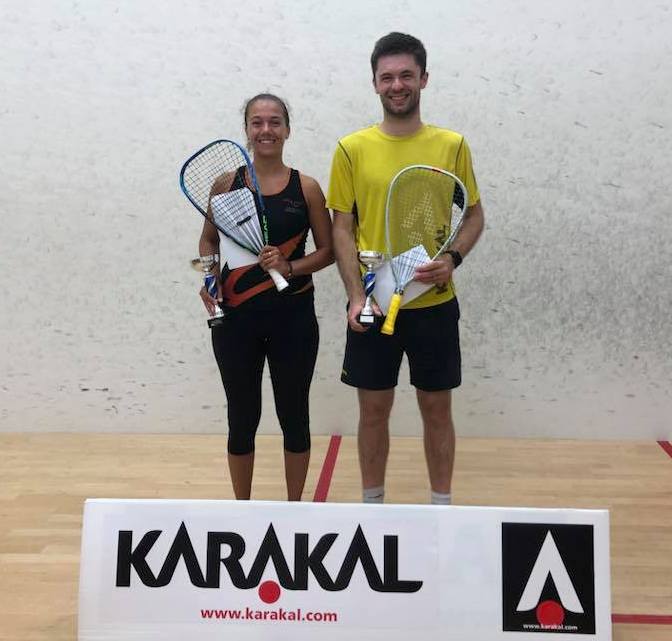 Saffery was given a stern test in round 1 against Lisa Key before coming through in 4 games and next took out 3/4 seed Chloe Marshall in 3 tight games, two of which went to 12-10. In the final she faced off against Squash 57 specialist Natalie Lawrence who had earlier taken the over 35 title. In her semi-final Lawrence had taken out number 2 seed and Safferys Priory team mate, Alicia Mead, in 4 games. The final went the distance with Saffery just having enough to take the match and title 11-8 in the fifth.

The men’s event was dominated by reigning champion Mike Harris from Deon, who saw off Kent;s Ted Jeal in straight games in the final. Miles Jenkins produced the best local performance beating Chris Hall in a 90 minute quarter-final marathon before losing out to Jeal in the semi-final. Jason Pike also reached the quarter-finals before succumbing to Harris.

Lisa Key was the overwhelming favourite in the ladies over 40 category and showed her class to win all 4 matches without dropping a game. Vicky Askey of West Warwicks put up a storng performance in the over 35’s only being beaten into second place by ladies finalist Natalie Lawrence.

Edgbaston Priory’s Rob Shay took the honours in the over 65 event, beating top seed Ian Graham in three games in the final, being stretched in the third before closing it out 18-16. John Shingler, also from Priory, won the over 75 event in straight games over Gordon Stringer.

Tournament director Mike Edwards was pleased with how the event ran:

‘This years event was by far our hottest let alone best. The biggest entry for a ling time, and a first  in history bringing junior and seniors together on the same weekend. We are pleased that everyone had a fantastic weekend’.