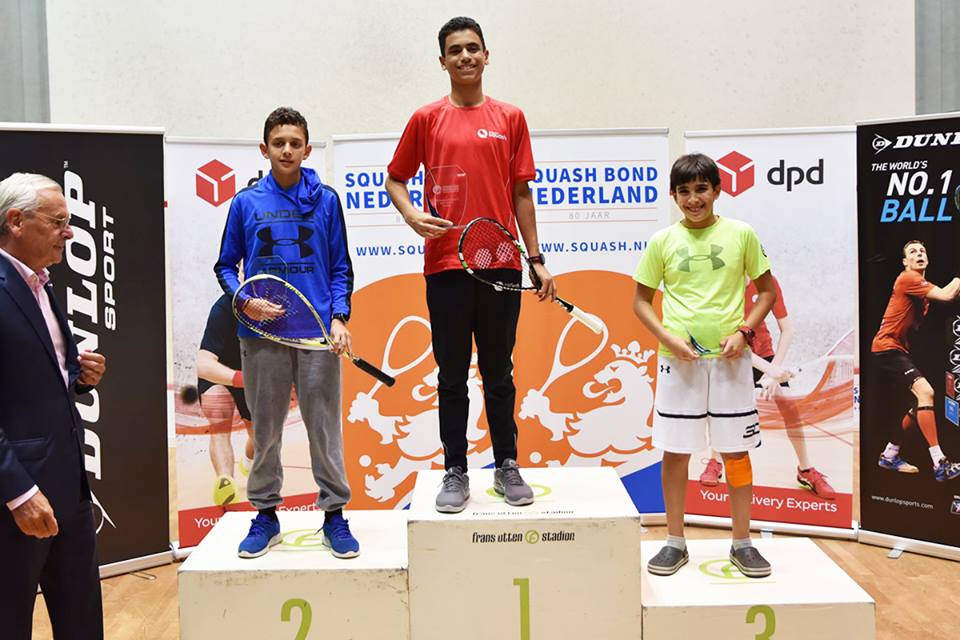 Warwickshire juniors upset the seedings to claim two of the titles at this year’s Dutch Junior Open in Amsterdam. Lewis Anderson of Edgbaston Priory was only seeded to reach the last 32 in the boys u19 event but has been in good form this season, claiming the British u17 title. Lewis upset Canada’s 3/4 seed Dominic Wren in four games to make the last 16 where he took out England’s Lucas Hughes in straight games. A 5 game victory in the last 8 against 5/8 seed Perry Malik set up a semi-final against fellow giant killer Carlton Oldham. Anderson made it to the final in straight games and the took the title with an impressive 4 game win against Spain’s number 2 seed Ivan Perez.

Kenilworth’s Adb-Allah Eissa (boys u13) was forecast to make the last 16 but it was here he took out 3/4 seed Vivann Shah, of India, In 4 games. A comfortable win followed in the quater-finals against Sussex’s Baily Malik to provide a semi-final match up with Luhann Groenewald of South Africa. Eissa powered through to the final in 4 games where he overcame Coumbian Juan Jose Torres Lara, also in 4.

Adb-Allah’s younger sister Mariam was also in action in the girls u11 event. Eissa, raked number 2 in England met England number 1 and top seed, Olivia Coucher-Porter, in the semi-finals. Mariam claimed the upset and won in 4 games to meet Egypt’s Jumana Foaud in the final. Fouad proved too strong as Eissa lost out in straight games.