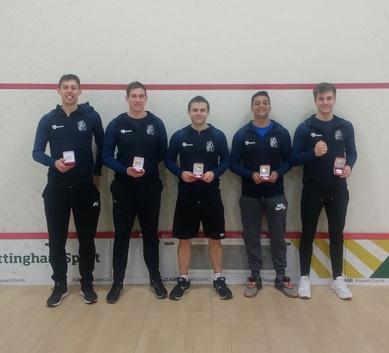 Last year saw our men post an impressive 4th place finish on their return to the premier division after a long absence. They travelled to Nottingham University this time round with a strong line up and hoping to go better this year.

Chris Hall and Jason Pike returned from last years squad together with the return of Haroon Rashid who was selected on the back of a good season. The squad was completed with debutants Miles Jenkins, Josh Owen and Leiws Anderson. Jenkins having switched allegiance after a few years training at West Warwicks, whilst Owen and Anderson are two of our big hopes for the future.

The draw pitted the boys against a Surrey team who were missing a couple of players at the top end. There was still a job to be done, Owen and Rashid on first and winning in contrasting style; Owen in straight games and Rashid sneaking a high paced affair 11-9 in the 5th. Anderson and Jenkins both took fairly comfortable wins before Hall rounded things off in straight games.

The opponenets in the semi-final were Hertfordshire, last years champions who had beaten Devon in their first match. Owen put in one of his best performances of the year to take out an experienced opponent in straight games. The tie was levelled as Rashid didn’t quite have enough left in the tank after his battle in the morning. Jenkins was the underdog and couldn;t quite get close enough to his England internationl opposition. That left Pike and Hall needing wins to put us through and, despite a big effort, Pike lost out in a close 3-1. Hall won his match 3-2 in what had become a dead rubber. Hertfordshire would go on to win the competition, betaing Sussex 3-2 in the final.

There was still a medal place up for grabs with Kent standing in the way. This was a straightforward win for the team who looked slightly fresher than the Kent boys after the Saturday night social.

Thanks to captain Sam Miller for organising the team and coming to support despite being injured. Also for Mo Sarwar for helping the men’s and ladies teams.