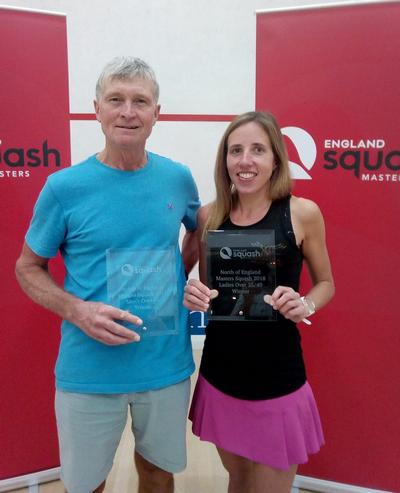 The 2018/19 Masters squash season is underway with  the West of England (Wolverhapton) and North (Pontefract) events having been completed. The Masters circuit is very well supported with well over 100 players making it to each of the regional tournaments.

There was success for Solihull’s Rachel Woolford in Wolverhampton as she beat Wales’ Helen Barnard 3-1 in the women’s O’50 final. At the same event Sutton’s Andy Murray had a cracking run to the final, losing out to fellow 3/4 seed Stephen Mcloughlin in the O’50 event. Murray’s Sutton team mate Nigel Stephens won the plate event in the men’s O40’s

In Pontefract, Kenilworth’s Natalie Townsend (women’s O’35/40) was top seed and came through a tough group of 4 to take the title, beating Reka Gay 3-1 in what was to be the deciding match. Leamington’s Geoff Redfern made light of his 5/8 seeding to beat two higher seeded players on the way to the final. He then took down Scotland Jim Dougal in straight games to become the O’65 champion.