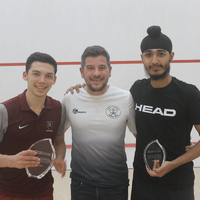 A fitting finale to what has been another fantastic week at Sutton Coldfield Squash Club. A packed show court provided an electric atmosphere and the match itself certainly didn’t disappoint.

54 minutes for three games should show exactly how competitive this match was, two exceptional movers battling it out and throwing all they could at each other. As has been his trademark this week Victor was firing in the boast to great effect but just when it looked like he had the rally won, Abhay would not only get to the ball but somehow manage to counter beautifully. There were at least 3 or 4 cross court drops into the nick from Singh when it looked like he wouldn’t even get the ball back. Crouin just about had more control of the play, volleying at every opportunity and using great variety to try and outmanoeuvre his opponent.

The crowd tried to get behind Singh in the third, desperate for another game but in the end Victor had enough to close it out in straight games for a deserved win.

Both players spoke with great respect for the other after the match, with Victor also keen to recognise the support of his father throughout his career so far. It is certain that these youngsters have a bright future within the game.

Many thanks must go to our sponsor Aston and Fincher (Oliver Fincher) who once again have supported the event and do so much for the club. Thanks also tothe organising committee – Chris Hall, Pete Oddy, Tony McAllister and Mat Stevens. And last but not least our referees during the week – Tim Osgerby, Marcus Hayes, Guido Le Lorrain and Mo Sarwar.