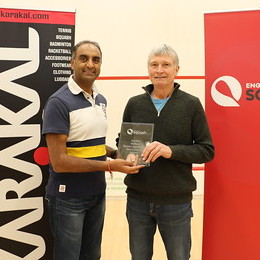 Leamington’s Geoff Redfern showed some great form to take the Over 65 title at the Midlands Masters event, held at Wolverhampton Lawn Tennis and Squash Club. Seeded 2nd, Redfern received a bye in the first round before beating Phillip Leak (CBA) 3-1 and Robert Lathbury (DYS) 3-0 to reach the semi finals. A 3-1 win against Cheshire’s Geoff Walton setting up a showdown with top seed Stuart Hardy of Middlesex. Hardy taking the first before Redfern battled back to claim the next three.

Also on form was Sutton’s Andy Murray who took out 2nd seed Stephen Mcloughlin (HPH) on his way to the final of the Over 50’s.  Murray eventually going down to top seed David Youngs (NOR) in four games.