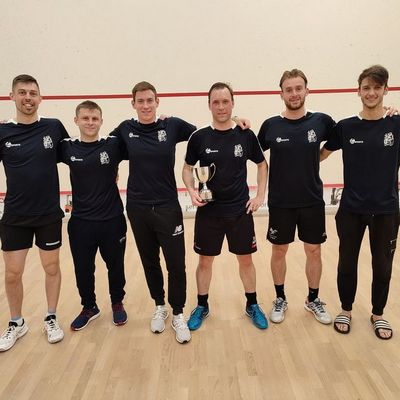 A huge well done to the Men’s and Women’s teams who finished 1st and 4th respectively at the national inter county championship finals!

Having finished 4th and 3rd respectively in the last two championships before Covid struck, the men’s side were looking to go further this time and were able to call on a strong squad for the event.

The tie against Devon was first up, the opposition missing a couple of their regular players to give us a slight edge before the match. Jason Pike and Sam Miller were up first, both putting in professional performances to gain straight game wins with neither seriously troubled. Abd-Allah Eissa had a potentially tricky tie against former England junior international Jim Bristow. Bristow punishing any junior play from Eissa, forcing the youngster to play a more mature game to come through in 4 games. Once Jordan Hardwick had made his way to the club via a detour to Nottingham University, he was looking very sharp to gain a quick-fire 3-0 win. Last on was Chris Hall against the talented Mike Harris, Harris taking a tight first game before running away with the second. Hall finding some form in the third and fourth but the Devon stalwart took the match 3-1.

Sussex had edged Northumbria 3-2 in their first match meaning the Southern side would be our opposition in the semi-finals. Pike getting the side off to the best possible start with another controlled showing, whilst Eissa put in another excellent effort to take out fellow England ranked youngster George Porter 3-0. The Kenilworth players efforts even more impressive given he was fasting during the event. Hardwick again showed his growing maturity to get through in straight games against a very good player in Lucas Hughes. Hall came up against an inspired Ollie Pett who put on a clinical display and didn’t let the Sutton Coldfield coach into the match. Last match on was Sam Miller who looked out of sorts against the very athletic Noah Meredith, the Sussex player winning through. However the early work done by our 3,4 and 5 string enough to take us to the final!

Two wins on the Saturday meant the men were through to the final, with a gentle warning from captain Miller not to enjoy the evening too much. Despite toiletgate, shoegate and kebabgate, everyone was looking in decent shape on the Sunday to take on an exceptionally strong Yorkshire side. However, we were bolstered by additions at the top of the order of Miles Jenkins and Elliott Morris.

First match on were the number 3 strings, Hall taking on his old junior counterpart Chris Simpson who had gone onto an impressive senior career. A high-quality match with Hall perhaps playing his best squash of the weekend but Simpson just having the edge in each game to give Yorkshire the lead. Jenkins and Hardwick were on next with Hardwick again very focused to beat a slightly worse for wear Ben Sockett 3-0. Jenkins played against the hugely talented Sam Todd, with the Warwickshire man looking slightly tired from his PSA event which finished just the day before, Todd taking this one in 3. Morris was playing training partner Stuart Macgregor and these two put on a more relaxed showing with some exhibition style squash, Morris keeping his nose in front throughout. With the match poised at 2-2, Miller came up against full time professional Joel Arscott in a match which looked like it could be a cracker. Miller rolled back the years with his best squash of the weekend, soaking up anything the Arscott could throw at him before countering with some stunning winners to take a 3-0 win and giving Warwickshire men their first county championship title in recent memory.

In the first match Warwickshire faced Essex and won 5-0. Jess Laura and Jenny all won 3-0 controlling the ball around the court nicely and hitting some very accurate shots to the back of the court, causing problems for there opponents. Lucy went 2-0 up in her rubber, with a comeback from her opponent to tie at 2-2. Lucy regained the momentum to take a convincing 11-5 win.

Olivia faced junior Lara Newton. This was a very even match with Olivia managing to sneak the first two games, Lara fought back to 2-2, Olivia managed to secure the victory with an 11-4 win

In the Second Rubber, Warwickshire faced Gloucestershire and lost 4-1. A strong 3-0 win for Jess, whilst Olivia and Lucy went down in three very close games, which could have gone either way. Laura also going down in 4 in a nail bitting match. Jenny McKenna had a tough task losing in 3 to Julianne Courtice world ranked 55, but put on a spirited display.

On Sunday the team faced Cheshire in the 3/4th playoff. Jess kept up her form winning convincingly 3-0, despite some close and competitive matches the team went down 4-1. Especially Laura going down 12-10 in the fifth.

A thoroughly enjoyable weekend for everyone involved!