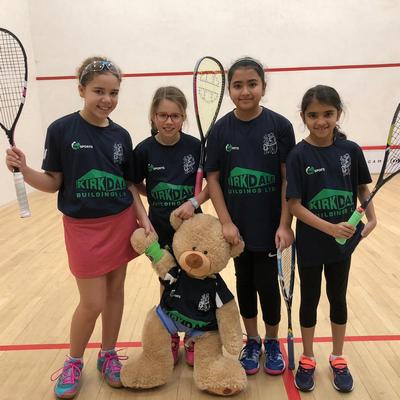 January saw the junior inter county finals with the main finals held in Nottingham and some of the plate events in Warwickshire at Freedom Fitness Warwick. Six of out teams had made it through to the finals with the Boys U15 B team in the plate finals.

The girls lost out to eventual winners Hampshire 0-3 in a tought first round draw. They then won 3-0 against Sussex and Essex to finish 5th.

A narrow 2-1 defeat against Yorkshire in the first round, followed by a 3-0 win against Kent left the boys playing for 5th and 6th. Northumbria edged them out 2-1 in the last match.

The boys all stepped up in the absence of Ismail Khalil. Hampshire were beaten 5-0 in the first match before coming up against a very strong Kent Side who were too strong. A 1-4 loss to Yorkshire leaving the boys in a creditable 4th place.

The girls kicked off with 4-1 win against Essex, then losing out 1-4 to Yorkshire in the semi-finals. South East Wales were then beaten 4-1 for the girls to finish 3rd.

The A team lost out to Yorkshire 1-4 and Middlesex 2-3 in their first two matches. They got a good win over Lincolshire (4-1) to finish 7th.

The B team were in the plate finals and recorded wins over South East Wales (3-2) and Leicestershire (5-0). Devon just had too much for them, resulting in a 2nd place plate finish.

This was another team missing an important player, but everyone put in a great effort. Yorkshire were too good in round 1 (0-5) as were Essex (0-5) depsite some close matches in each tie. A much tighter final game against Cheshire and a 3-2 win to finish 7th.