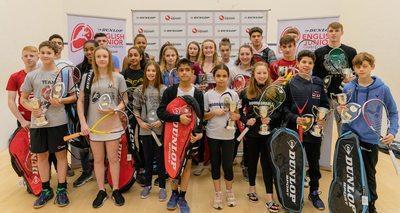 Warwickshire junior players had a hugely successful weekend at the 2019 English Junior Championships in Hull.

Solihull’s Ismail Khalil was seeded to reach the quarter finals but upset the seedings with a four game win over Hampshire’s George Griffiths. He wasn’t finished there however, with another upset on the cards as he took out the second seed Jake Johnston (Surrey) in a tight three games win. He produced a stunning comeback in the final against top seed Dylan Kalar (Berkshire) to claim his first national title 11-9. (7-11, 10-12, 14-12, 11-6, 11-9).

Mariam’s older brother Abd-Allah was another seeded to reach the quarter finals, this time in the boys under 15’s. He would have fancied his chances to progress further and duly took out Kent’s Caleb boy in three to reach the semi-finals. Here he overcame second seed Finlay Withington (Lancashire) over four games to set up a final with the impressive top seed Jonah Bryant. Depsite pushing Bryant close in the first two game, Eissa lost out in a tight three games, 12-10, 11-9, 11-5.

Meha Shah, also of Edgbaston Priory, reached the final of the girls u13 event with victories against Renitha Srindran (Essex) in the quarters and Megan Light (Hampshire) in the semi’s. Despite winning the first game against Lancashire’s Charlie McCrone, Shah just lost out in four.

Hassan Khalil couldn’t quite make it a famly double but ended with a impressive third place finish, only losing out to eventual winner Ben Smith (Lincolshire) in the semi-finals.